Friends of Bulgarian NGOs: The National and Local Ombudswoman 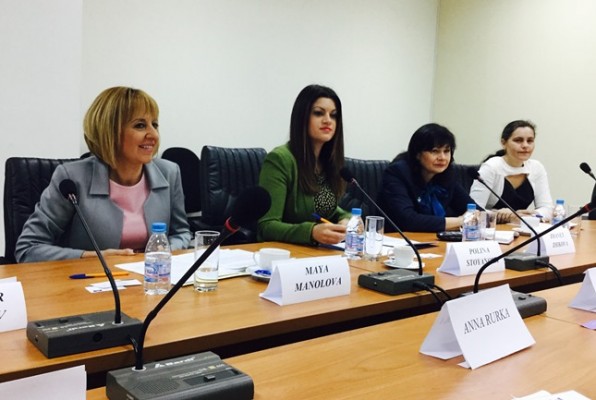 This week I was invited to join Council of Europe’s Conference of International NGOs to Sofia to learn about how civil society participate in decision-making. While we were meet with hospitality, I found myself leave with very different versions from the government and the NGOs. Read my blog about the two versions of civil dialogue. Additional, we had the opportunity to meet the national and local ombudswoman of Sofia, who shared with us their role in supporting civil society.

Ms Maya Manolova is the National Ombudswoman, despite her short time in office she has already taken ambitious initiatives to improve the situation for NGOs in Bulgaria. As a former Member of the Parliament Ms Manolova has long fought for the Parliament to open up for citizens to be a part of decision making, by for example changing internal rules and enable citizens to vote for individual political candidates. As an Ombudswoman she act as an intermediate between the public and civil sector. Her ambition is to work among people in their own neighbourhoods, set up permanent reception offices across the country, and ensure effective and meaningful participation of the civil sector. Ms Manolova spoke warmly about NGOs upwards struggle, how she pay equal respect to all, and that politicians have a lot to learn from well established human rights NGOs. She expressed concern for how to ensure sustainability of social NGOs, which are beneficiaries of time bound funding.

As an example of her work Ms Manolova organised a roundtable (on the same day as our visit) on health care reforms for accessible and quality services. It gathered among others NGOs, the parliament and government, and practitioners, and was broadcasted on national television.

The Ombudsman office receives 50 complaints a day, mostly from citizens and some from NGOs. Out of 265 municipalities, only 14 have a local ombudsman. As a part of her mandate, she is encouraging more municipalities to elect an ombudsman.

Ms Lilia Hristova, the Ombudswoman of Sofia Municipality works to protect the rights of natural and legal persons in Sofia. This she does by raising awareness about her mandate in the neighbourhoods and surrounding villages of Sofia. Local Ombudsmen is not subordinate nor accountable to the national Ombudsman.

Ms Hristova receives request and complaints mostly from individuals, some from ad-hoc initiatives by local civil society formation that are not registered, and few from NGOs. Sofia Ombudsman has a programme named ‘Europe’, that awards small grants for a duration of less than a year, one of the thematic priorities is for a sustainable urban environment. Another funding is ‘Green Sofia’, for associations of landlords, within a building. Social projects are not managed by the local Ombudsman, instead it is run by the local branches of the Ministries Agency for Employment and Provision of Social Services.

The national and local Ombudsman sometimes refer cases to each other, and share their position if the complaint is made with both authorities. Sofia Ombudsman is itself part of an NGO, National Associations of Local Mediators. Such a formations of public officials associations, raises an interesting question what defines an NGO.

Council of Europe Conference of INGOs will prepare a report following the visit with recommendations in support of public participation of NGOs in Bulgaria.

Thanks to Anna Rurka (President of the Conference of INGOs) for the invitation, and to School of Politics for hosting us!

See also Equinet Europe, whose members are the national equality bodies, including the ombudsmen.