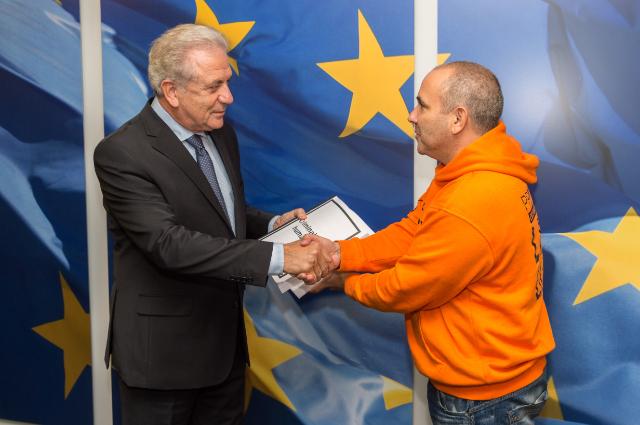 Manuel Blanco (PROEMAID) presents Commissioner Dimitris Avramopoulos with a citizens’ petition calling for the end of criminalisation of individuals and organisations offering humanitarian assistance to migrants and refugees. The petition was organised by Social Platform, WeMove and PROEMAID.

On 20 October Social Platform met with European Commissioner Dimitris Avramopoulos, responsible for Migration, Home Affairs and Citizenship. Together with the citizens’ movement WeMove we delivered signatures of 132,386 people from across all EU Member States, against the criminalisation of humanitarian assistance to migrants. The petition was handed over by Manuel Blanco, a citizen who has been personally affected by the current EU Facilitation Directive that provides Member States the option – but not the obligation – to exempt humanitarian assistance from the law against smuggling.

“With a worsening refugee crisis we desperately need a Europe wide humanitarian policy to help these vulnerable people fleeing conflict. We do not need to be criminalising good Samaritans who offer help to people at risk of drowning.” – comment by a petitioner

Manuel is a fire chief in Sevilla in Spain and the founder of the volunteer organisation ‘Professional Emergency Aid’ (PROMEAID). Manuel and his colleagues were cooperating with the Greek coast guard and supporting their work by rescuing lives of people off the coast of the island of Lesbos, until one day when the Greek government prosecuted them with human smuggling. The court case is pending, and they could face a sentence of ten years’ imprisonment (watch their video here).

“We do not want to by any means hinder your activities’, stated the Commissioner, explaining that on the contrary we are here to work together – a message the Commissioner promised he would convey to Member State’s Ministers of Interior next time they meet. The Commissioner agreed that there needs to be a clearer definition who is a smuggler and who is not, because experiences such as PROMEAID’s should not happen. The Commissioner called on civil society organisations to share their knowledge of what is happening on the ground, as the European Commission needs more evidence in order to consider revising the EU Facilitation Directive. We also need joint actions to ensure effective implementation of existing legal framework, and common practices between prosecutors to target the real smugglers, said the Commissioner.

Towards the end of the meeting we were given a few minutes to mention some of our overall concerns about migration and asylum. Contrary to the position of many civil society organisations that child detention has to end, the Commissioner responded that it is a tool of last resort that can be necessary for those close to the age of 18 years. We also mentioned agreements such as those with Turkey and Afghanistan that have been negotiated without the involvement of civil society. The Commissioner answered that they are less agreements and more political statements, and that civil society is welcome to contribute to make them a reality, by ensuring social services, humanitarian assistance and the protection of rights. Finally, we highlighted our worries with regards to the social consequences of the Asylum Package, in particular with regards to the Reception Conditions Directive and the Qualification Directive. The Commissioner said it is important to ensure that the system is not abused and that the proposals are the result of accommodating very different and domestically sensitive views by Member States.

Unfortunately we did not have a chance to respond to the Commissioner, so we therefore agreed to continue our dialogue in the beginning of next year, together with the European NGO Platform on Asylum and Migration. “We are not far away from each other, we serve the same goal” said Commissioner Avramopoulos before rushing off to another meeting.

Related event: Roundtable on the EU Facilitation Directive in the European Parliament on the 15 November- read more here