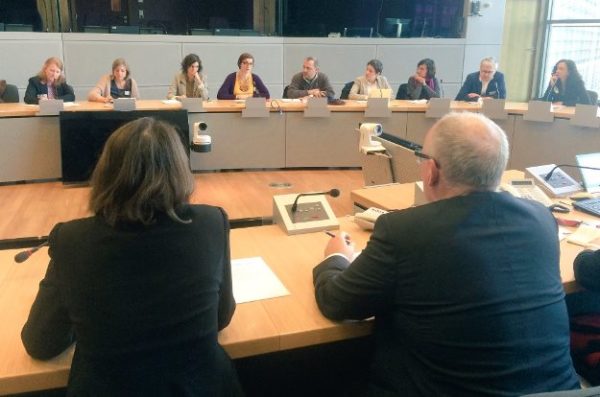 On 17 February a delegation of civil society organisations from the Human Rights and Democracy Network met with Frans Timmermans, Vice-President of the European Commission. Initially we asked to meet to discuss an EU Internal Strategy to Promote Human Rights. The Vice-President insisted on discussing migration integration, yet we made the point that European Union values are universal human rights values, and that we want to see coherence between the EU’s approach to internal and external human rights. The EU currently has a strategy in place for its work on human rights beyond the EU’s borders, but no such strategy exists within the EU.

We focused our messages on two main barriers to integration: a lack of access to services, and discrimination and violence.

Access to services for all is crucial for the integration of migrants, contributes to social cohesion and public health and is cost effective. The EU must revise the Facilitation Directive to ensure that civil society can provide humanitarian assistance – such as food, shelter and health care – to undocumented migrants without running the risk of facing sanctions. In addition, providers or humanitarian assistance should not be forced to report undocumented migrants they provide services to. Mr Timmermans took note and welcomed our position.

Vice-President Timmermans spoke about challenges that are grounded in citizen’s fears, beyond Euroscepticism.

Firstly, he addressed emotional reactions to the humanitarian crisis  affecting migrants and refugees, which have been fuelled by incidents such as those of sexual harassment against women in Cologne  on New Year’s Eve. People who in fact are against migration have infiltrated the public debate on human rights by proclaiming to be feminists and champions of equal treatment .

Secondly, he expressed his concern that the migration system is being abused, and that in some cases it is cheaper for migrants to use unofficial routes into EU Member States – such as one Member State opening their borders to allow access to another – rather than following official EU migration and asylum procedures. As a response to questions from some of the civil society organisations on this topic, he replied that one solution could be resettlement of migrants in Europe by bringing them in directly from non-EU countries, rather than waiting for them to make the journey using irregular routes.  The European Commission will launch infringement procedures against countries that do not respect the Reception Conditions Directive, knowing that their intention is to treat people badly to encourage them to go elsewhere.

Thirdly, there is a need to clarify that the issue of integration is not only about Muslims; it includes refugees, migrants, long-term residents, and second and third generation migrants. The Vice-President looks to Canada, Israel and the United States  as good examples of how to tackle segregation and intervene when failing school systems influence young people to turn against their own neighbourhood.

Fourthly, integration does not lead to more migrants staying; on the contrary, fast integration gives individuals a possibility to take an educated decision regarding their return. Tolerance is institutionalised indifference, the Vice-President said, arguing for a move to a higher level of inclusive tolerance that demands rights and obligations from both sides. Migrants need to be taught the ‘code of conduct’ in Europe, as Germany is doing.

The Vice-President committed to giving us feedback after the meeting with the European Council on 18-19 February, when migration will be discussed. As Social Platform we will be following-up with him regarding our recommendations.

Read about our campaign to decriminalise solidarity and our work on access to services.