One step ahead for Social Europe 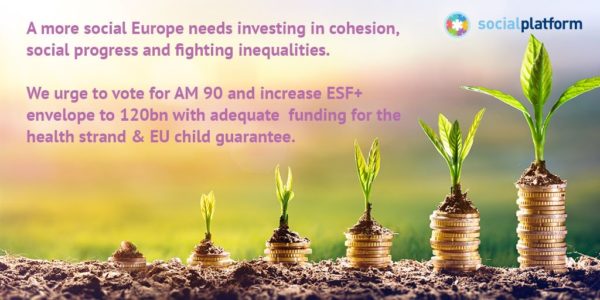 Last week the European Parliament adopted the Committee on Employment and Social Affairs (“EMPL”) report on the next European Social Fund (ESF+) by a considerable majority. The adopted text can be found here. The outcome of the vote is good news for a more social Europe and a welcome incentive for a more ambitious implementation of the European Pillar of Social Rights. The Parliament increased the overall ESF+ budget to €120,46 billion (an 19% increase compared to the original proposal by the European Commission), by doubling the resources for youth employment and by introducing a Child Guarantee of €5.9 billion. Funds allocated for the implementation of the future Health Programme under ESF+ got a 14.5% increase.

While Social Platform and its members have been advocating for an increase of earmarking dedicated to social inclusion and fighting poverty from 25% to 30%, the compromised 27% is a small, but still relevant gain. It is especially relevant against the background of the overall result which puts the additional 3% earmarking for social inclusion of the most deprived and/or material deprivation on top and not within the earlier earmarking for social inclusion measures. This element is further strengthened by keeping co-financing for material deprivation at 85%. That means that also in more affluent regions, existing pockets of poverty and deprivation such as for instance homelessness can be more effectively targeted.

As Social Platform, we also welcome the Parliament’s approval to boost inclusive partnerships and step up meaningful participation of civil society organisations, equality bodies and human rights institutions in programming and delivery of ESF+. A stronger focus on and dedicated funding for training and other capacity building activities with civil society and social partners could further enhance the Fund’s impact and effectiveness.

After this vote, the ball is now in the court of the Member States. While the European Parliament is ready to enter negotiations, the European Council still has considerable work to do. The “negotiating box” released by the Austrian presidency towards the end of its mandate, gives a number of key options to be discussed for all future EU budget headings including “Cohesion and Values”, which accommodates the proposal for ESF+. However, many details and figures are missing and still need to be discussed in various working groups and approved by the Permanent Representatives Committee (Coreper). By the beginning of this year, only one article of the ESF+ proposal had been fully discussed at the respective working level and many issues ranging from earmarking, co-financing and the link from the European Semester to eligible costs and dedicated measures for youth and migrant inclusion still need to be tackled.

While an agreement needs to focus on quality, the political calendar brings potential risks and gives the next EU Parliament the option to reopen the file after the elections in May. This could lead to further delays, endanger timely programming and put beneficiaries at risk. Therefore the Council needs to swiftly advance on ESF+ under the current Romanian Presidency with a view of at least reaching a partial general approach to kick-start negotiations in the current legislature. As Social Platform we will follow the progress and make sure that one step ahead will not translate into two steps back. 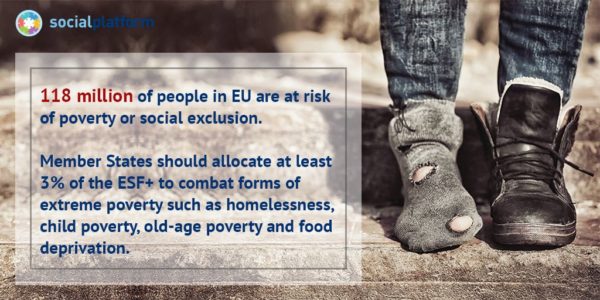