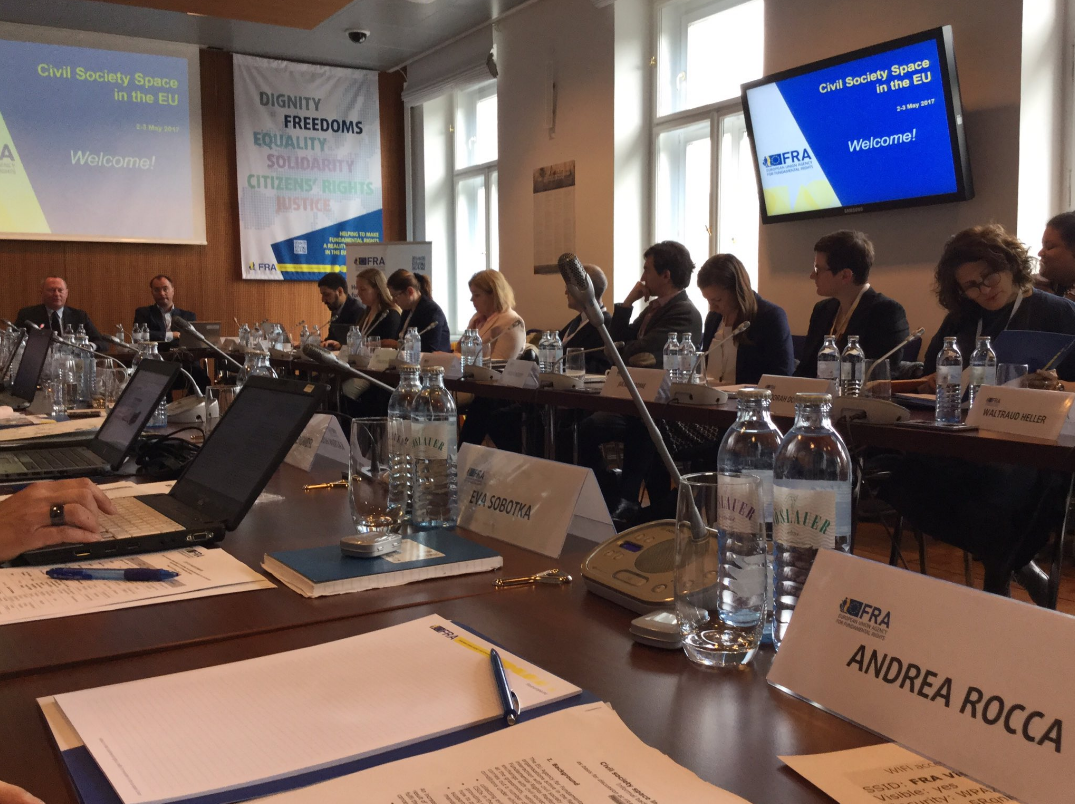 Making sure that civil society organisations can act both as advocates towards decision-makers and as service providers towards people in need is a key concern for Social Platform. Lately we have seen a worrying trend in several European countries (such as Hungary, Poland and Romania) where civil society’s space to function is being restricted and they feel unsafe. Reactionary groups are becoming more sophisticated in their ways to target progressive organisations for example by hijacking the ‘human rights’ language. The EU has put in place mechanisms and tools to protect human rights defenders and civil society outside the Union, but so far little attention has been given to safeguarding civil society in the EU’s own Member States. This is why we work together with Civil Society Europe, the Human Rights and Democracy Network (HRDN) and the EU Agency for Fundamental Rights (FRA).

This week I participated in a meeting organised by FRA gathering a diverse group of experts to discuss challenges, experiences and solutions to protect and improve civil society’s space. One of the discussions focused on violence and harassment of human rights defenders – whether they are part of organised civil society, those who defend people as a part of their profession (for example doctors and journalists), or individuals.

Civil society organisations can be attacked in many ways, either as an organisation by means of burdensome and unjust administrative or legal barriers or by personalised attacks against individuals. The government in countries such as Hungary accuse civil society funded by international donors os acting against national interests. At the same time, civil society actors are are increasingly used to harassment and intimidation, and consequently do not report it; if they do there are rarely any repercussion. Therefore we often lack information, data and early-warning mechanisms. In cases where national civil society organisations have tried to flag an issue, the international community has often not paid attention in time. Although the situation is worrying, there are some successful practices, such as “Facing all the Facts”, a project that Social Platform is an associate partner of. It is a collaboration of different actors, including organisations working on anti-semitism, islamophobia and homophobia. They carry out hate crime monitoring and provide training for police, authorities and civil society. Our member ILGA-Europe (the European Region of the International Lesbian, Gay, Bisexual, Trans and Intersex Association) reviews the legal situation in Europe, including incidents of violence against LGBTI people, and publishes the results in its annual Rainbow Map. Another example is the European Commission’s initiative to gather civil society representatives (including Social Platform and some of our members) around the table with Member States to discuss how to tackle racism, xenophobia and other forms of intolerance. During the meeting, I learned about the EU’s emergency fund for human rights defenders who face imminent danger and threats – a mechanism that some participants proposed should be made available within the Union as well.

The fact that the EU has a framework on how to promote human rights and support civil society outside the Union highlights a call that we have made many times: that there is a need for a strategy for EU internal affairs, too. Commission First Vice-President Frans Timmermans addressed this question at Civil Society Europe’s General Assembly on 28 April. He told participants that he will invite civil society to a stakeholder platform for dialogue on human rights (he has recently put in place a platform to exchange views on the implementation of the Sustainable Development Goals). The Vice-President believe a dialogue for exchange is more effective than a new mechanism to tackle Member States’ violations of the rule of law, democracy and human rights. On the contrary, a new mechanism may be used by some Member States to direct attention away from acting on immediate issues to instead discuss lengthy bureaucratic processes.

Other issues discussed during the meeting were funding and capacity-building needs. FRA will follow-up the expert meeting with a report and recommendations, including exploring how to further connect with civil society via its recently relaunched Fundamental Rights Platform, to which more than 500 organisations have already registered. On 27 June we will organise a workshop at the Civil Society Days in Brussels on how to support civil society to grown and act in the EU, which will include speakers from FRA and Civil Society Europe to present the results of their surveys and research, as well as testimonies from civil society actors.

Click here for more information on our work on civil dialogue.