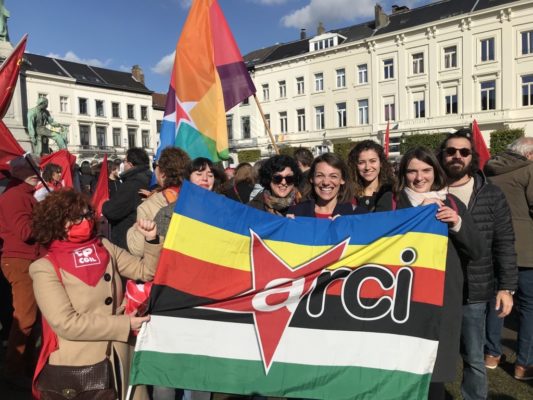 Italy has seen a surge of violent neo-fascist attacks in recent weeks. On 9 October, groups of violent neo-fascists infiltrated a protest against COVID-19 vaccine passes in Rome, attacking a hospital and a trade union building. The vaccine debate has proved to be fertile ground for an already growing movement to set down even stronger roots.

Italy has always struggled with its relationship with fascism. Some parts of the so-called parliamentary far-right, such as Brothers of Italy and Lega, do not openly condemn fascism because of the fascist links and identity of many of their affiliates. Fortunately, this is not the only signal that is coming from my country: in response to these recent attacks many joined demonstrations last Saturday led by CGIL, Italy’s largest trade union. The demonstrators stood together in solidarity to say there is no place for fascism and fascist ideas in our country. I joined the demo organised in Brussels (pictured above) and was heartened to see that more than 100,000 people rallied in Rome, with the support of the main representatives of Italy’s centre-left forces.

What’s fanning the flames of fascism?

While it’s important to take to the streets affirming that we are antifascist and demand the dissolution of these neo-fascist parties – in line with Italian law – we also need to look at the root causes of these movements, including poverty and inequality exacerbated by the COVID-19 pandemic. Italy and the EU need to address why people are drawn to such extremist groups. People are asking for better safety nets, they’re tired of not being able to make ends meet, and they want decent living and working conditions. Data from the Italian national statistics office ISTAT showed that the number of Italians living in poverty rose sharply in 2020 to its highest level for at least 15 years as the pandemic brought economic pain to much of the country. In real terms, this means that in 2020 5.6 million people, or 9.4% of the population, lived in absolute poverty, defined as those unable to buy goods and services that are central to a decent standard of living: that’s an extra one million people compared to 2019.

It’s in this climate and a fragile society that neo-fascist organisations and ideas are spreading. We need strong social standards backed up by proper investment in social policies, and to make people feel heard and more included in the political discourse. If our European leaders won’t listen to these people, they’ll keep turning to those on the fascist fringes who will.