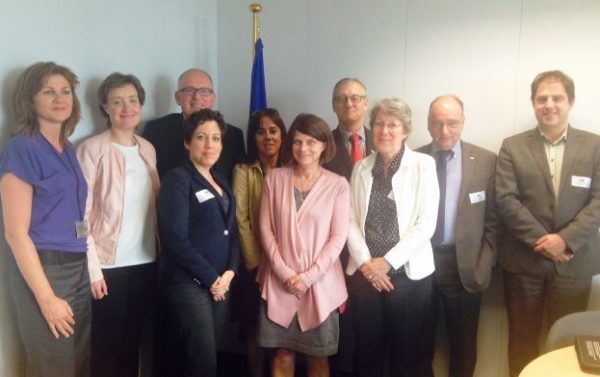 On 9 July a small delegation of Social Platform members met with the European Commission’s First Vice-President Frans Timmermans (responsible for Better Regulation, Interinstitutional Relations, the Rule of Law and the Charter of Fundamental Rights), to talk about how the European Semester can promote fundamental rights, instead of undermining them.

In the wake of the situation in Greece we delivered our letter “Social Europe hanging in the balance”, with the Vice-President remarking on the European Union’s (EU) lack of sustainability of finances and that “We were stupid to not say anything about Greece’s spending and now we are on the verge of collapse, which will hurt millions of people“.

The one hour conversation was open and frank, and the delegation demonstrated to the Vice-President the inconsistency and incoherence of the European Semester.

The International Union of Tenants gave the example of how Sweden negotiates rent prices to make them affordable for people. For three years the Commission’s Directorate-General for Economic and Financial Affairs has given Country-Specific Recommendations (CSRs) to get rid of rent control for more market-oriented prices, instead of promoting it as a way to tackle over-indebtedness, which comes from very high rents. AGE Platform Europe and the European Women’s Lobby (EWL) talked about how CSRs have consequences on the gender pension gap. Recommendations on cuts in spending tend to disproportionately affect areas such as child care, and thereby women’s employment. The 14 member states that received recommendations to reform their pension systems do not refer to gender. Only Austria once received a recommendation on the gender pension gap. The Vice-President promised that the Commission will come out with recommendations on Women and Employment, which will include work-life balance and education.

The European Federation of National Organisations Working with the Homeless (FEANTSA) explained that overall there are inconsistent and illogical variations between what CSRs member states get and do not get; what they do not get may send the message that they are doing better, which might not be the case. The European Association of Service Providers for Persons with Disabilities (EASPD) demonstrated that sometimes we see powerful country reports but they are not reflected in the CSRs, or the CSRs point in the right direction but member states’ interpretation is the opposite. The European Anti-Poverty Network (EAPN) stressed the importance of checking the impact on people before asking member states to prioritise fiscal and budgetary consolidation and reduced social spending.

The Vice-President responded that social sustainable policies and sustainable fiscal policies should not be contradictory, and he rejected the idea that fiscally responsible countries automatically trigger fundamental rights violations. He concurred that in the past the Commission should have made better social assessments in the country programmes but that this is already improving. The Vice-President agreed to follow-up on the issue of inconsistency between country reports and CSRs and when member states wrongly interpret such recommendations. However, he did warn us that we should not make the CSRs more important than they are; member states have the right but not the obligation to take them on board. The Commission acts where it has added value and within its competence. President Jean-Claude Juncker and Commissioner Marianne Thyssen are both highly committed and soon the Commission will present a new Social Agenda; while most proposals will be about employment, efforts will be made to make it more comprehensive.

“We need to reach socially excluded people. People fear the future and project it onto the elites and on the unemployed. The EU depends on the middle class, if they kick below and above the whole society is in trouble. You can count on me where I can be helpful in this context.”

We look forward to continuing our civil dialogue with Vice-President Timmermans on fundamental rights issues, particularly concerning people’s socio-economic conditions. Previous meetings that non-governmental organisations have had with the Vice-President have been on his upcoming Fundamental Rights Colloquium on “preventing and combating anti-Semitic and anti-Muslim hatred in Europe” on 1-2 October 2015, and on migration. Our next meeting with him will focus on an EU Internal Strategy to Promote Human Rights.