What are social inclusion and solidarity? A simple question, complex answer 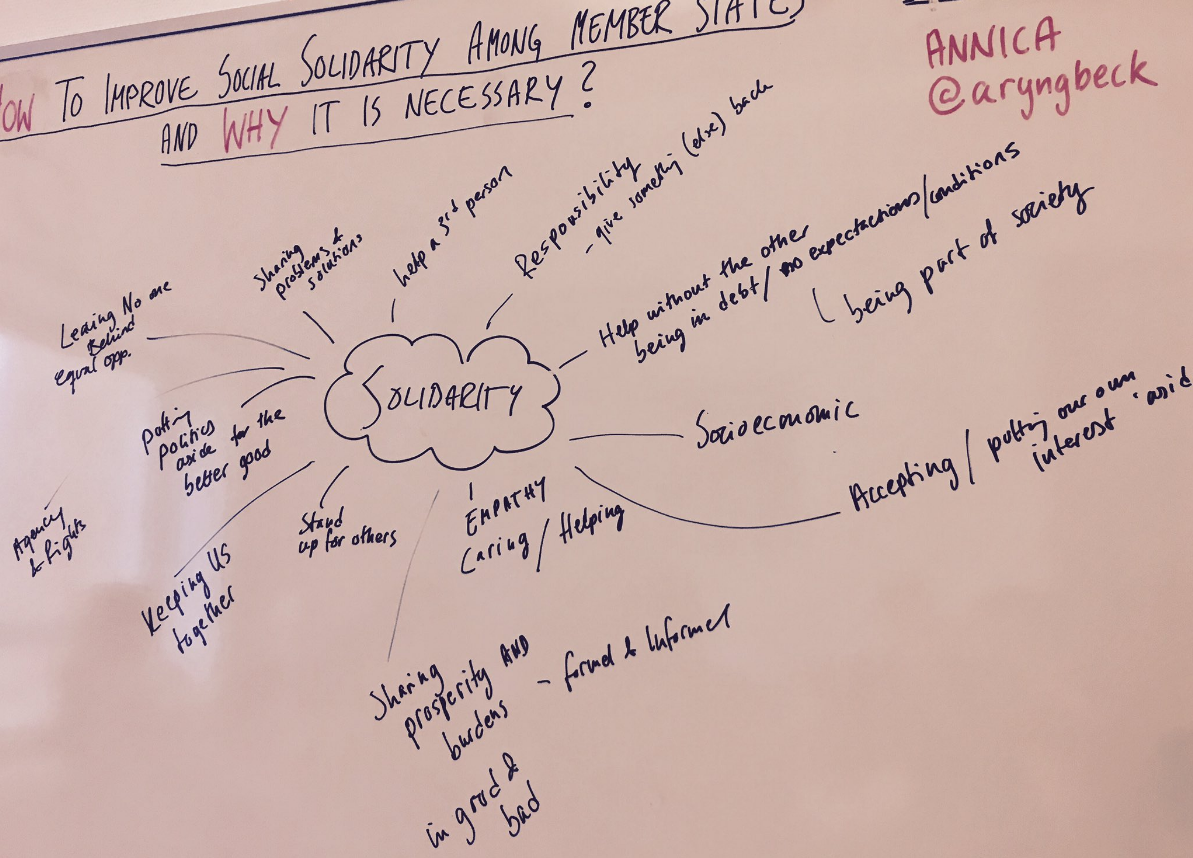 Last week I participated in several interesting discussions about social inclusion and social solidarity, topics that in many ways interrelate with each other.

On Tuesday I was invited by Heinrich-Böll-Stiftung to facilitate an exchange with a group of young Europeans on how to improve social solidarity among Member States. I left the meeting thinking if these smart young people will be our next generation of politicians and leaders, we will for sure head towards a bright future!

“Standing up for others and leaving no one behind; sharing problems and solutions – in good and bad; helping others without expecting something in return; being empathic and caring; and putting politics aside for the general good”, were some of the answers to my question on what solidarity means to them.

What they wanted to know was: is it possible to enforce solidarity through legislation? How can we solve corruption and misinformation in some Member States? How can we enhance solidarity when Member States do not want to be a part of the EU? One participant said, “I am a Europhile but when being asked about what solidarity means to me, I did not think about the EU”.

A silver thread throughout the conversation was about EU solidarity and migration. I mentioned Social Platform’s campaign to decriminalise solidarity to allow individuals and non-profit organisations to provide humanitarian assistance to undocumented migrants, and added that there is a discrepancy between politicians’ anti-immigration positions in for example Hungary, and the solidarity many citizens display. Extreme-right and anti-immigration sympathisers are often people not living in the larger cities that host migrants, this is for example the situation in the south of Sweden where I am from. Another issue is not only the fact that some Member States are not respecting their committment to show solidarity and relocate migrants from Italy and Greece; one of the participants pointed out that migrants also have a misconception about Member States, such as in Portugal where many do not want to live.

Another silver thread was education as a way to enhance solidarity within and between Member States. The participants talked about the need for education as early as kindergarten age to learn how to show solidarity with others, later in elementary school to learn about the social benefits that come with solidarity, and finally to learn about common EU culture, history, economic and social policies. Volunteering as a part of education is a also an important component; whether compulsory or optional, it should be a “choice of heart” said one of the participants. Education is also a way to connect people to each other, like Heinrich-Böll-Stiftung EU is doing with the Europe for Citizens Programme by inviting groups of young people to Brussels. Not only do they learn about the EU, they build transnational friendships and when back home they can share their knowledge with their peers.

Other proposals included fighting corruption and propaganda, introducing minimum wages across the EU, and adopting the Work-Life Balance Directive. One of the participants proposed that European healthcare insurance should include the right to not only emergency care, but also planned care in the particular case of abortion for women who are residing in EU Member States where it is illegal. While there is a clear north-south, east-west divide in Europe, with Sweden in first place in the EU Social Justice Index 2016, and Greece in last place, Slovenia is surprisingly in 9th place and therefore a successful country to learn from, noted one of the participants.

The day before, I participated in a meeting gathering beneficiaries of EU funding for social inclusion, such as the Europe for Citizens Programme and Erasmus+. Some of the overall future trends and challenges identified as obstacles to social inclusion were about communities (whether local, transnational or digital) living in silos and lacking a sense of belonging – ‘neo tribalism’, as defined by one of the participants – Euroscepticism and rise of populism, discrepancies between political anti-immigration discourse and citizens’ solidarity, and differences between the perception of EU (social) policies and the reality of them. Digitalisation and individualisation was also mentioned in terms of how individuals are involved online and not via civil society organisations, and how the European Commission turns to citizens directly, for example, with online public consultations. A final point was on the need for Europe to better welcome and adapt to refugees fleeing their home countries due to war, poverty and climate conditions.

Cooperation and working together (beyond our usual suspects), across sectors, were some of the suggestions for how we can achieve social inclusion. Getting out of our comfort zone and not only defining social inclusion on the basis of who is excluded, but rather by defining the norm and who is included was another idea. We also identified the need for self-reflection to improve how we practice equality and diversity within our own organisations and communities – work that we as Social Platform have started. Furthermore, we discussed how to build a community and identity that bridges the gap between local, national and European level. We identified some good practices from across Member States, funded by the EU. My personal dream would be to have a ‘science-lab’ fund for civil society to apply from in order to try out new creative and innovative ways to work with Europeans to change EU politics and sentiments – while being allowed to fail. Although the EU encourages innovation it also requires successful results. Already vulnerable civil society organisations with limited resources cannot take the risk of losing funding by not delivering as expected. In order to develop and adapt to a rapidly changing environment we – humans and organisations – need to reinvent and take risks.