On September 23-24 the second European Citizens Summit (view the twitter story) took place outside the European Parliamentt. Tobias Troll from CONCORD DEEP welcomed the participants and explained that the aim of the summit is to addresse transformational changes and alternative worldviews needed, that the current economic and political system cannot address. Keynote speaker Vincent Liegey, a 'degrowth activist' explained that degrowth is about: 1) Provoke a new way of thinking: the debate started ten years ago in France, questioning the notion of infinite growth and how it does not give us more wellbeing. We are depending on growth so we do not need to promote it; instead we need to question our addiction to consumption. 2) Have a multidimensional approach: the crisis is about interconnected issues (which are hard to grasp for many), such as bio diversity, fossil energy, chemical pollution, social and economic crisis, job creation, inequalities etc., and 3) Create a new movement: and encourage de-growth activism. We need to put forward new solutions, local solidarity, hope and activism to counter a dark future where rich becoming richer and societies more unequal.

In a ‘fishbowl’ format participants discussed ‘What is the Europe we want?’ led by Luca Bonaccorsi (Green10) and Maeve Patterson (Amnesty International). Pierre Baussand (Director of Social Platform) kick-started the discussion with asking the participants what are our individual responsibility to make a change in society. Pierrette Pape (European Women’s Lobby) raised the importance of being strong against racism, classism, xenophobia and sexism. Nicolas Beger (Amnesty International) reminded all that once upon a time the notion of being born with the same value was a radical thought, while we have moved beyond this we still have to remind EU institutions that discrimination remains. Participants voiced that culture helps us think outside the box, that we need economic independent women, women among the elite and wage parity. We should focus on what unites us instead of what separates us, meet our foes that do not have the same views and offer alternatives. 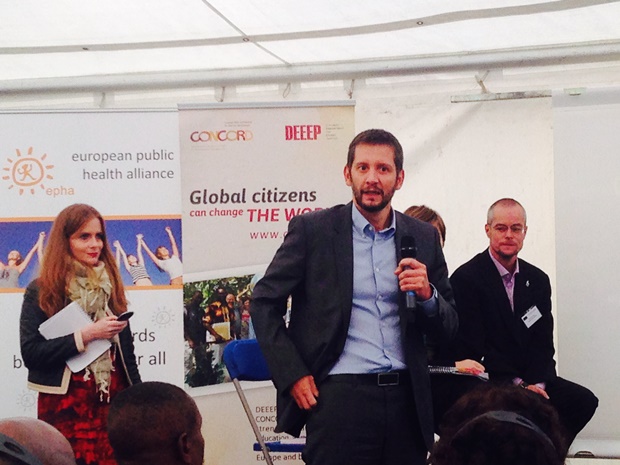 CONCORD DEEP and Social Platform facilitated together a workshop on ‘Wealth and Distribution’. Pierre Baussand (Director) opened up with asking participants for their understanding of wealth and distribution. The speakers were: Conny Reuter (Solidar), Catherine Olier (Oxfam), Sergi Corbalain (Fair Trade) and Aya Chebbi (blogger from Tunisia). Some of the facts that were mentioned were how civil society movements have worked against inequalities and for fair and inclusive societies since a long time. We have all the data we need about inequalities in wealth, but e.g. 25 million can still not live off their income, and in the same time decision makers decrease the quality of employment. Resources (e.g. development aid and EU Funds) are not always reaching the people, instead it increases inequalities. Inequalities between people and countries are growing us apart, figures: the richest 85 people own as much as the poorest 3.5 billion of the world’s population. With this background the participants discussed what we can do, as individuals, NGOs and decision makers, both new radical ideas and known ways that we need to be reminded about.

Among the participants proposal for change were: Focus on the rich instead of the poor. Put a cap on salary and provide a basic income. Create a movement against paying tax until the money is used for the right purpose. Change to ethical bank accounts. Apply the principle of ‘the more you earn the more tax you pay’ to company’s based on size and staff. Put a cap on the size of a company to deregulate concentration on the market. Tax wealth and capital. Close the tax haven. Create an educational movement. Make fair trade work in other sectors e.g. transport, mining. Learn from EU countries with strong social protection systems. Inform yourself about what social standards are applied to your consumption. The workshop ended on a positive note that ‘if we make the rights choices we get the right result’ and if we ‘change the recipe of the cake; we can make it both bigger and tastier so it last for all’.

On the second day participants engage in dialogue with MEPs. Closing keynote speaker was Susan George (founder of ATTAC.org). She explained how we are living of a ‘planet B’ that does not even exist, how we have finished using all our resources that our planet can provide and are consuming our own substance. She warned about the consequences of the Transatlantic Trade and Investment Partnership (TTIP) but also encouraged that it is a fight we can win.