EWL at the Generation Equality Forum in Paris: shaping the way forward for equality

From 30 June to 2 July 2021, the governments of France and Mexico together with UN Women organised the Generation Equality Forum, a global event to mark the 25th anniversary of the Beijing declaration and platform for action. 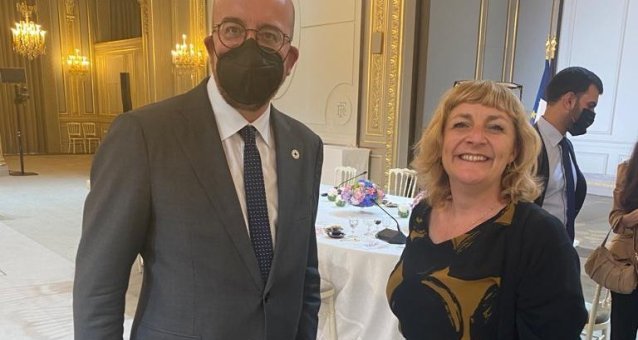 The Generation Equality Forum (GEF) – initially foreseen for 2020, but unfortunately disrupted by the pandemic – has been a high moment of commitments towards enhancing equality between women and men, in particular through the six Action Coalitions gathering CSOs, States and the private sector around key areas for improvement. More than a year after EWL was selected as a co-leader of the Action Coalition on Gender-Based Violence (GBV), it was an honour to finally take part to this great gathering, both online and – for the first time in many months after the pandemic – in person, in Paris!

We were glad to witness the ambition, dedication and work of UN Women, the governments of Mexico and France, and all the leaders and commitment makers who spent time and resources to organise this year’s edition of the Forum and engage into months of work leading up to the announcement of their commitments in Paris. We welcome the strong and ambitious commitments that were made all across the world, especially the combined 40 billion dollars that will be dedicated to improving women and girls’ rights. We are looking forward to seeing how this budget will be distributed to achieve our goals by 2026 and hope that the next 5 years will deliver on equality between women and men, thanks to the actions and targets detailed in the final Global Acceleration Plan unveiled during the GEF.

EWL was proud to be invited to the opening ceremony on 30 June, as a recognition of our strong involvement and work as co-leaders of the Action Coalition of GBV and our key role in upholding women’s rights in Europe. Our Secretary General Joanna Maycock represented EWL during the ceremony, where she had the occasion to meet many international leaders. In particular, she had the chance to present some of our key recommendations on equality between women and men in the EU to the President of the Council of the European Union Charles Michel, calling for a formal Council configuration dedicated to this issue.

We were also delighted to finally have the occasion to present our individual and collective commitments during the session dedicated to our Action Coalition on 1 July, , along with our other co-leaders. As EWL, in the next 5 years, we commit to continuing to:

push governments, institutions, funders and other relevant actors to officially and concretely recognise the importance, vital contribution and indispensability of women’s rights’ organisations and the essential services they provide, in particular through enhancing and advancing the participation of women’s rights organisations in all relevant decision-making processes and spaces, and increasing their financial resources, including through gender responsive budgeting;

develop and promote materials on feminist sexuality education, and disseminate these materials to EWL members, partners and relevant institutions at the national and European level advocating for the inclusion, strengthening, promotion and mainstreaming of feminist principles at all levels of education.

We also joined the collective commitment on Addressing Violence and Harassment in the World of Work, by committing to advocating for the ratification and implementation of the ILO Convention No.190.

As co-leaders and part of civil society, we are committed to achieving our two-fold role: honouring our own commitments and holding the other commitment-makers accountable (States, private companies…), ensuring the money and actions announced are implemented by 2026. Now is the time to turn words into actions and to ensure all women and girls in the world can enjoy their rights and live their lives to their full potential.