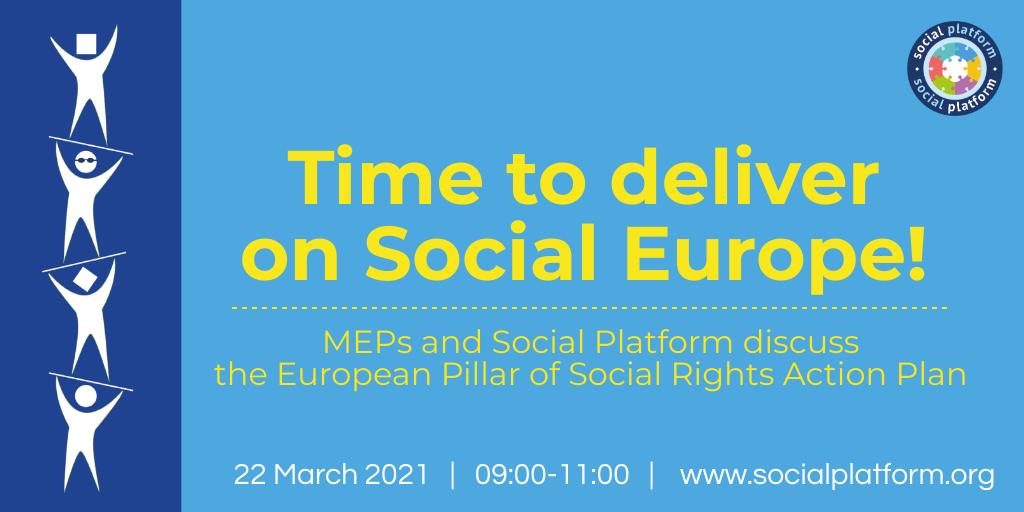 On 22 March 2021, Social Platform organised a virtual event bringing together coordinators of various political groups in the European Parliament committee on Employment and Social Affairs and Social Platform and our members. The discussion focused on the opportunities and limitations of the European Commission’s recently released Action Plan on the European Pillar of Social Rights, and how the Parliament and civil society organisations (CSOs) can strengthen their collaboration to support the full and ambitious implementation of the Social Pillar.

Social Platform Management Committee member Mila Shamku presented Social Platform’s initial views on the Action Plan, including key feedback received from our member organisation. Welcoming the Action Plan and many of its initiatives as a whole, she highlighted shortcomings we see with regards to the ambition of several of the targets and sub-targets contained in the Social Pillar as well as the coverage of other policy areas, including the mainstreaming of equality and non-discrimination, minimum income, and social services. She also emphasised the importance of the revision of the Social Scoreboard and stressed it must fully cover all 20 Social Pillar principles and disaggregated data by population groups and household types. She went on to underline the importance of involving CSOs at all stages of the implementation of the Social Pillar.

In reaction Ms Shamku’s presentation, the panel shared their views on the Action Plan’s key achievements and missed opportunities:

Member of the European Parliament (MEP) Dennis Radtke (European People’s Party) underlined the importance of setting concrete binding targets against which politicians can be measured by their voters in terms of delivery, and emphasised that collective bargaining needs to be at the centre of Social Pillar implementation.

Agnes Jongerius MEP (Socialists and Democrats) discussed the need to review the European Union’s current economic governance system, as targets alone will not be sufficient to stimulate social progress. She also expressed her hope of including a social progress protocol in the EU treaties and called for a more ambitious target on poverty reduction, in line with the United Nations Sustainable Development Goals (SDGs).

Dragoş Pîslaru MEP (Renew Europe) asserted that the social agenda must be a priority for everyone, as otherwise politicians may exploit fear and exclusion for their own goals, putting democracy at risk. He also emphasised the importance of revisiting the concept of social spending, which should be seen as an investment in people rather than a cost.

Sylvie Brunet MEP (Renew Europe) called for better analysis of the social impact of the crisis, as well as of the green and digital transition if they are to be successfully managed. She also emphasised the need to take action on youth unemployment.

Kira Marie Peter-Hansen MEP (Greens/European Free Alliance) discussed the need for binding legislation to implement the Action Plan, and called for a strengthened Youth Guarantee, a ban on unpaid internships, and measures to prevent young people from constantly finding themselves in short-term work schemes.

Katrin Langensiepen MEP (Greens/European Free Alliance) pointed out that bringing people into employment and education is crucial, but in itself is insufficient to protect people from poverty. She also expressed regret about the lack of action foreseen to combat homelessness and an EU anti-poverty strategy in the Action Plan.

Nikolaj Villumsen MEP (European United Left/Nordic Green Left) emphasised that, often, the internal market is at the centre of EU action, rather than social rights and workers’ rights. He supported the need for a binding social progress protocol to prioritise social and workers’ rights.

All MEPs voiced their support for the meaningful involvement of CSOs in the implementation of the Social Pillar.

The MEPs’ interventions prompted a variety of questions from the audience, covering the role and capacity of the European Semester process in its current state to monitor the implementation of the Social Pillar, the mainstreaming of equality and non-discrimination, quality employment, the role of education and training in ensuring social inclusion, as well as EU action on long-term care and recognition of unpaid care and domestic work.

In his closing remarks, Piotr Sadowski, President of Social Platform emphasised the importance of strengthening collaboration between the Parliament and CSOs. In this spirit, he announced Social Platform’s intention to establish a ‘Social Pillar Champions’ group in the Parliament, to further our joint efforts on the full and ambitious implementation of the Social Pillar and the building of a more social Europe.

The event was live-streamed and can be watched here.