Only one Pole spoke at this summit 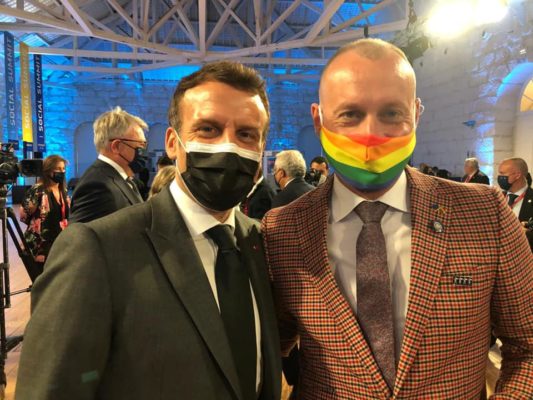 Published  in Polish on Onet.pl, 23 May 2021 | English translation below

During the Social Summit in Porto, one Pole spoke, Piotr Sadowski – President of Social Platform, which brings together almost 3 thousand NGOs from across Europe. – I call for a renewal of our commitment to social issues. But we must be sure that when we return home we will not hide behind declarations again, but that we will fulfill our commitments. It is high time to take the social agenda to the highest level of EU decision-making and turn these promises into action,” he said.

On 8 May, the first physical summit of the European Council this year concluded in Porto, in the north of Portugal. The day before, a unique Social Summit took place, the organization of which was requested by the Portuguese Presidency of the EU Council. The main theme: “Social Europe”, which is becoming increasingly important in an increasingly grafted European Union.

The meeting was of course attended by the Polish delegation headed by Mateusz Morawiecki, but it was another Pole who turned out to be the star: Piotr Sadowski, president of the Social Platform.

From its beginnings, the social dimension of European integration has been a side issue. The history of integration is primarily about the development of the free market, regulations regarding participation in this market and corrective mechanisms such as the cohesion policy. – Today, social Europe should be a mechanism, where when making each decision, we think about the human being, who is the subject of the policy – says Piotr Sadowski.

According to the latest Eurobarometer, as many as 88% of Europeans believe that social Europe is a priority for them. The survey asked about equal access to the labour market, fair working conditions and social security.

Piotr Sadowski is the president of the Social Platform organization, which groups 46 sectoral networks of national organizations dealing with, for example, rights of the disabled, youth, volunteering, rights of seniors, children, parents, tenants, patients, women, consumers, etc. In total, there are approx. 2 thousand. 800 NGOs in total.

The president of this umbrella organization became two years ago, his mandate has just been renewed. But no wonder – his speech in Porto resonated in the world of European NGOs. Among those listening to him were French President Emmanuel Macron, European Commission President Ursula von der Leyen, Portuguese host and Prime Minister Antonio Costa, and many other European leaders. Mateusz Morawiecki was also among them. Were there any contacts with the Polish delegation on the occasion of the Porto summit? – Unfortunately none,” Sadowski sadly admits.

Works and lives between three countries

Road 41-year-old from Gdynia to Porto looked like this: in III High School in Gdynia he learned about United World Colleges program. As a teenager he went to Atlantic College in Wales. – That school defined me. I came out of the closet at the age of 17 – he explained. Working for volunteer organizations in the UK and then in Brussels. After many years, he was elected Secretary General of Volonteurope, a pan-European network of voluntary organisations. Volonteurope is one of the organizations comprising the Social Platform – this is how Piotr Sadowski climbed the ladder to the top in this largest European network of NGOs. Today he works and lives between three countries, from where he manages the largest social organization in the European Union.

– The social agenda should be high. We need to build a social Europe together. The problem is that politicians hide behind the national social model,” says Piotr Sadowski. – Defining certain groups of people, such as LGBTI groups, as an ideology is not only wrong, but a complete undermining of our common European values of equality and solidarity – he stressed.

He donned a rainbow mask and socks especially for the meeting in Porto. For many European leaders like Macron, Sanna Marin (Prime Minister of Finland), Pedro Sanchez (Spain), Kaja Kallas (Estonia), Xavier Bettel (Luxembourg) his way of arguing was consistent. That is why Sadowski is listened to. – I call for a renewal of our commitment to social issues. But we must be sure that when we return home, we will not hide behind declarations again, but will fulfil our commitments. It is time to take the social agenda to the highest level of EU decision-making and turn these promises into action.

Piotr Sadowski’s speech is a heartbeat for left-wing politicians such as Antonio Costa, Prime Minister of Portugal. It was the country’s presidency of the EU Council that set social issues as a priority and included the Social Platform as an equal partner in the Porto Summit.

– Building Social Europe is about understanding that we are one Europe, where every person – whether they have an EU passport or not – can live their personal and professional lives with dignity and play an active role in their communities. Social Europe is a single European social model, in which everyone is included, respected, treated as a human being and not discriminated against,” argued Piotr Sadowski.

He and his organization had been preparing for the Porto summit since 2018. They had constant working contact with the Portuguese. – We hoped that we would be invited, that the Social Platform would be a representative of European civil society. But we didn’t find out whether it would take place in physical form until two weeks before the summit, which is not surprising given the pandemic, he said. Previous summits took place years ago in Luxembourg (1997) and Goteborg (2017). Sadowski hopes the next one will be held in France next year.

The final document of the May 7 Social Summit is very important in Porto. President of the Social Platform: – The declaration was important, and that we will sign it together with the Commission, the EU Council and Parliament, and the social partners.

Indeed, this is the first time that a representative of civil society has spoken at a European Summit, and also under the document, besides Sadowski’s signature, are the signatures of the Presidents of the European institutions – von der Leyen, Sassolli (President of the European Parliament), Antonio Costa on behalf of the Member States, as well as other invited organizations representing business and trade unionists. Two years earlier in Goteborg, the social partners only had access to participate in workshops. – The Portuguese have shown how important it is for them to include NGOs, says Sadowski.

He continues: – Earlier in the workshop I had, among others, President Macron. He listened with interest, there were also prime ministers of Luxembourg, Estonia, Finland. Many wise politicians. Von der Leyen was running between workshops. I spoke with President Macron, asked him to continue the Social Summit during the French Presidency of the Council next year.

“We hope to emerge from the biggest crisis in decades”

Piotr Sadowski has a clear message. In his speech he said: “For us there should be one European social model where there is a place for everyone and anyone, everyone is respected, treated as human beings and not discriminated against. If we are to take seriously the rebuilding of Europe after a pandemic from which we exclude no one, let us stop focusing on what we cannot do and instead look at what can be done to improve the lives of every person in our societies, in every nook and cranny of our European Union.”

Roger Casale, former Member of the House of Commons and leader of New Europeans, commented on the Social Platform President’s speech: “It is great to finally see another voice from Poland shaping the European agenda in a way that strengthens rather than restricts the rights of European citizens.”

On paper, the European Pillar of Social Rights is an ambitious mechanism. It has 20 social goals on equal employment opportunities, fair working conditions and social protection. Each is interconnected like an interlocking vessel. Piotr Sadowski reminds us of the different shades of social exclusion: – There are, for example, the working poor, that is, people who, despite working, cannot make ends meet.

The key to understanding the social pillar is not so much the ambitious goals, but the fact that they remain non-binding. Competence in social policy the Union does not have much. Social Platform leader’s response: – We hope to come out of the biggest crisis in decades. It is important to realize that we are in this together as Europeans and we have the opportunity today to build an inclusive European social model.

Everyone has their small victories at the Porto Summit. Poland and Hungary are again fighting against gender equality, as the term translates in English as “gender equality.” Sadowski celebrates another success: the removal of the word “structural reforms” from the text, which connotes cutting social spending.

Piotr Sadowski speaks the language of Macron and von der Leyen, criticizing the prevailing thinking that we can – or must – solve national problems only within our own nation-states. “What is missing is a change in national mentality, taking care of common European values more broadly.”

In his day job, he has constant interactions with members of the European Parliament and commissioners. Just before the pandemic, he saw Commission Vice-President Dombrovskis. – The topics we talk about, such as with Vera Jourova, are very important. We recently held an event with Matthew Caruana Galizia, who is the son of a murdered investigative journalist in Malta and today fights corruption himself, fights for justice and journalistic freedom.

The pandemic marks a new opening in thinking about social Europe, including in Porto. But we are a long way from what many in Brussels call a ‘European health union’. – The pandemic has affected us all. Member countries are fighting among themselves for access to vaccines and to medical services,” recalls Sadowski. And there are many more problems, starting with an apparent brain drain of medics from Poland and other Central European countries. – Solidarity and coordination of efforts to protect health are needed. In a pandemic, we learned that doctors and nurses are some of the most important people who have been on the front lines of this war. And what is the level of their pay? – says the leader of the Social Platform.

The social summits are accelerating. It took 20 years between Luxembourg and Goteborg, another almost four we waited for another one. And next year there will be another summit, which will again debate whether and how we can jointly achieve “soft” social goals. Piotr Sadowski and Social Platform hope to be there and work with President Macron and the French presidency of the EU Council. Either way, the fight for a real “Social Europe” continues.