Will the European Union be more social after Porto? 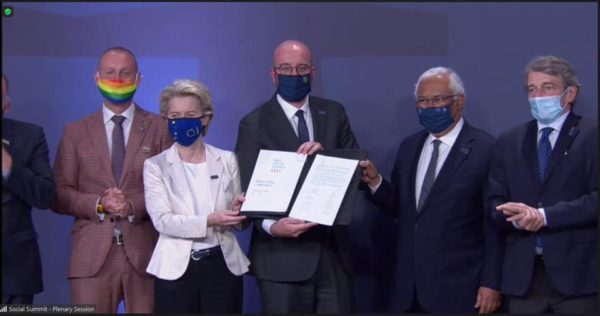 Published in Italian on Secondo Welfare, 10 September 2021 | English translation below

Last May in Portugal, the leaders of the EU states pledged to reach some ambitious targets on employment, training and poverty by 2030. With a series of in-depth studies, we will try to understand if and to what extent the European Pillar of Social Rights and the Porto declaration that supports it can be important for the future of the Union.

“To guarantee equal opportunities for all and not to leave anyone behind”. In the Porto Declaration that EU leaders signed last May there is also this commitment, as rhetorical as it is crucial. It is not the first time that the heads of state and government of the countries of the European Union have approved a document with these or similar words. Still, the occasion could prove to be particularly important. The conditional is a must, but several observers believe that the formal step taken in Portugal this time could lead to concrete actions. After years of austerity, the path towards a social Europe that started in 2015 could now resume and, thanks to the pandemic, proceed faster and more decisively.

In fact, in Porto, the Action Plan on the European Pillar of Social Rights proposed by the EU Commission was approved which, in particular, identifies three main objectives to be achieved by 2030:

In doing so, according to Joost Korte, the message that European leaders have sent is clear: “in times of great change, we must strengthen social rights”. Korte heads the Employment, Social Affairs and Inclusion Directorate of the EU Commission, which deals with the action plan. “Social rights – he explains to Secondo Welfare – must be a fundamental element of recovery from the coronavirus crisis and of the Union’s drive towards a fair digital and green transition”.

Sebastiano Sabato, senior researcher at the Observatoire social européen, agrees on this line. “The social summit in Porto and the declaration of the leaders link the European Pillar of Social Rights to the green and digital transition”, he argues, taking up a concept he had already shared with us a few months ago. “Not only. Since the Pillar was adopted in 2017 by the Juncker Commission, the summit was also a way to legitimize the social dimension even in the current context ”, adds the researcher.

According to Maurizio Ferrera, professor of Political Science at the University of Milan, Porto is a key moment in European integration. For the professor, who for five years dedicated himself to the Reconciling Economic and Social Europe (REScEU) project, “at the political level, the summit seals a social turning point after a decade of belated responses to the financial crisis and economic recession”. An opportunity for the Union to restart from the most concrete concerns of citizens, as also confirmed by a recent Eurobarometer survey.

Indeed, as the European Trade Union Institute (Etui) wrote, “it is not the first time that the EU has shown a strong sense of commitment to strengthening social and labor rights. The first social action plan was launched in 1973 “. Other plans followed over the years, until the Lisbon strategy was launched in 2000 which, continues Ferrera, “aimed to complete the framework of the Economic and Monetary Union with open coordination in the fields of employment and ‘social inclusion’.

Then, however, came the financial crisis of 2007-2008, which hit the European states in a different way and particularly hard the so-called PIGS: Portugal, Italy, Greece, Spain and, subsequently, Ireland as well. The next step was the European sovereign debt crisis or the Euro zone, with the rescue plans, the strong cuts in public spending, the very long negotiations between the EU states and the decisive interventions of the European Central Bank. In those years, Ferrera continues, “macroeconomic policies veered towards austerity, under the surveillance of a strengthened Stability and Growth Pact, while social and employment policies became a de facto adjustment variable, especially in the weaker Member States. “.

The result is that the objectives of the subsequent Europe 2020 strategy, launched in 2010, were never achieved: the employment rate in the 20-64 age group stopped at 73% (instead of 75) and the number of people at risk of poverty and social exclusion, it went from 73 to 69 million instead of falling by 20 as expected. All this at the level of the Union, not to mention the enormous internal disparities, to the detriment of the most affected states such as Italy.

From Gothenburg to Porto

In this context of growing inequalities, in 2014, Jean Claude Juncker became president of the Commission who, in his inauguration speech, hopes that the EU will also conquer the “triple A of the social”, alongside the economic-financial one. Three years later, in November 2017, during the Gothenburg Social Summit, the European Pillar of Social Rights with its 20 principles was approved.

“I attended both the Gothenburg and Porto summits and in Sweden the feeling was very different from that experienced this year”, remembers Valeria Ronzitti, general secretary of SGI Europe, which is a European association representing companies from services of general interest and is one of the three intersectoral social partners recognized by the EU Commission. “In 2017, Member States’ appetite for social dossiers was very low. Today, however, there is much more interest in the same issues. And the fact that the summit was hosted by Portugal was a strong signal because the country was able to emerge from the 2008 crisis by investing in physical and social infrastructures ”.

Compared to the past, according to Laura de Bonfils, Porto was also important for another reason. “For the first time, the negotiations saw civil society involved at the same level as the social partners. It is unique, which we hope will be repeated soon ”, says de Bonfils, who is the Policy & Advocacy Coordinator of Social Platform, a network of networks of European Third Sector organizations. “If we really want a social EU – she adds – it is essential that civil society is also involved”.

The future of the Pillar

Although on the whole judged positively by many, the Action Plan on the European Pillar of Social Rights also raises several perplexities. Of merit and method. ETUI, for example, underlines how “the quantitative objectives of the action plan appear rather ambitious”. The Institut Jacques Delors adds that several stakeholders would have preferred “more legislative initiatives – legally binding for states – while most of the actions are based on coordination, support and guidance of national policies”.

“The EU’s limited competences in social matters and the difficulties it usually encounters in adopting legislative proposals in this area have most likely dampened the Commission’s momentum and led it to prefer feasibility over ambition”, concludes the institute. . The European Union has the competences that the member states have decided to give up in order to put them in common. In some areas, such as the economy, these skills are greater. In others, such as immigration or the social issues themselves, they are much lower and therefore the Commission has less opportunity to have a direct impact.

Korte, who is an official of the EU Commission, explains his position: “our role is mainly to support and complete the activities at national, regional and local level. We can help, for example, by setting the framework for common action, coordinating policies and establishing a fair playing field. The EU also provides important funds to support employment, education, training and social policies in the Member States “. The initiative is therefore up to the individual countries, which must transfer the continental objectives to the national level and act accordingly. For this reason, according to de Bonfils, “it is now essential that each State set its targets for the three main themes, but also for the sub-themes, which are also decisive. Then, the role of the social scoreboard will be equally fundamental “.

The social scoreboard is the Social Scoreboard that the Juncker Commission has created and combined with the European Semester. Since 2010, each year the Commission has carried out a detailed analysis of the Draft Budgetary Plan, the macroeconomic challenges and the needs for structural reforms of each Member State, and then proposes specific recommendations to EU governments for the following 12-18 months. Initially, the semester concerned only the economic and financial aspects, but now it also covers the social ones and therefore will have a role in verifying the achievement of the objectives set in Porto for 2030.